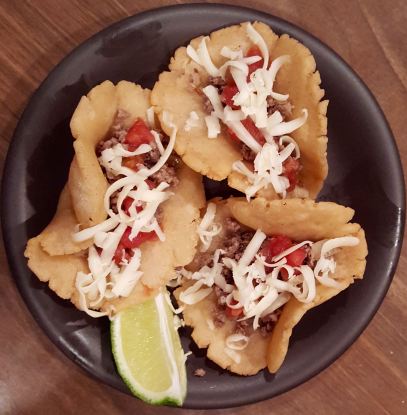 “Puffy Tacos”—those words strike fear in my heart, causing me to put off doing them for this blog for more than a year. I just ‘knew’ they wouldn’t puff for me! So what exactly is a puffy taco? A puffy taco is a corn tortilla that’s fried for 30-45 seconds until it puffs up and hold its shape. Sounds simple, right?

Well, when I read that Chef Bobby Flay couldn’t get his tacos to puff up, I figured we were doomed (we being me and Bill, the master fryer). But we were bored the other day, so…we pulled out the deep fryer and went to work. You need vegetable oil about 3 inches deep in your fryer. Depending on your fryer, heat the oil to between 300 and 400 degrees.

If you read about puffy tacos, you find that professional chefs like Diana Barrios-Treviño of San Antonio say it’s all about the masa, which should be fresh. Well, I can’t get fresh masa here in Queens, so I had to use maseca (the same stuff that Bobby used). I followed the package directions:

Mix together to form a soft dough, adding more water a tablespoon at a time if needed until the dough will roll into balls without being too sticky. Make 16 golf ball-sized parts, and keep them covered with a damp cloth until you put them into the tortilla press. I like to line the press with plastic wrap to make removing each tortilla easier (you can hand roll them if you don’t have a tortilla press). Press until flat and not too thin. As soon as you take each tortilla out of the press, put it into the oil.

Take a spatula or a pair of kitchen tongs and gently press down into the center of the tortilla so the sides fold up into a shell as it’s puffing. Remove and place on a paper towel to drain. They should be crisp on the outside but soft within. As you can see, ours didn’t form perfect folds, but they puffed! Fill like you would any other taco and enjoy. 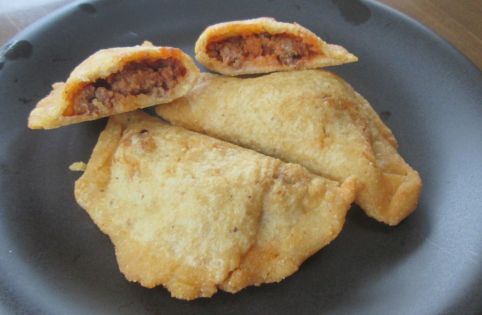 Make corn tortillas according to the masa package directions, using a smaller amount to press thin into a 4-inch circle. Stuff with Picadillo; fold tortillas over and crimp edges closed.

Deep fry until crisp. Garnish with lettuce and tomato if desired.

In skillet, brown potatoes in oil. Grind comino and garlic in molcajete and add to skillet along with ground beef and onion. Fry until ground beef is browned and drain off grease. Add remaining ingredients and simmer 15-20 minutes until liquid cooks down. 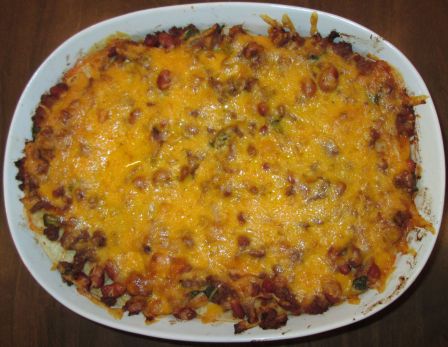 In molcajete, grind comino and then minced garlic. Add water, stir to loosen, and set aside. [See photo at right]

Brown meat and onion in large skillet or dutch oven and drain off excess fat. Add comino mixture. Add remaining ingredients as listed and mix thoroughly. Bring to a boil; reduce heat and simmer (covered if desired) 15-20 minutes until squash is tender.

In skillet, brown ground beef with 1 onion. Drain off excess grease. Add ketchup, chili powder, Tabasco, comino and salt and mix well. Add beans, mashing in pan. Heat through. Serve warm in chafing dish with olives heaped in the middle (to form the sombrero crown) and rings of onion and cheese (to form the brim).

Search Mex It Up!